Body like dry bone
Mind like dead ashes
This is true knowledge
Not to strive after knowing the whence.
In darkness, in obscurity
The mindless* cannot plan-
What manner of man is that?

It is painful to learn about his ordeal of four-time surgical removal of the tumor,medically termed tumourectomy, on his left arm-little above the elbow, followed by radiation therapy.

One canvery well perceive from the rare video clips the agony and related painful experience endured by him with utmost peace and calm and the fact that he never complained about it because of his complete detachment from his body. There prevails a remote feeling of meek anticipation in the hearts of some of the seekers then and now that, had there been no surgeries he could have continued his physical presence for some more years, without the pain he had to endure as a result of the surgeries and their after effects, so as to continue liberating the seekers effortlessly like a Bodhisattva. This could be well substantiated by the fact that he never agreed for the surgery at any point of time; the decision was purely by the oncologists of that time with the consensus from the administration and he simply allowed it to happen. 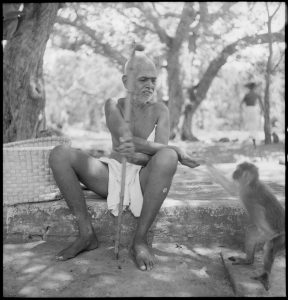 At this juncture, he even cited two human examples from the visitors who had similar kind of tumors on the visible part of their body. He inquired whether it was bothering them and they replied that it didn’t unless it was pressed upon and he proved it authentically with living instances that it was not necessary to carry out surgery and remove the tumor. Then he casually informed those who gathered around him that the tumors he was having on his hands were similar to that and there was no cause for concern or worry. He went one step further joking about the tumor that it was a ‘Suyambulingam’, a self-originated linga. He strongly felt that the tumor need not be touched at all and he simply allowed them to do surgery giving them full right to what the clinicians and the administration had decided to do as he was not at all concerned about his body and its health, anyway. We could feel his reluctance only when there was a conversation about the removal of his affected arm, the decision which was finally declined by the surgeons. 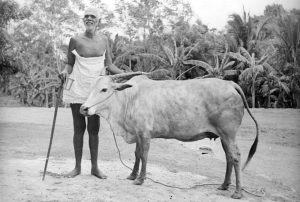 There were instances in the past that would exemplify his extraordinary endurance to pain and at the same time proving his extreme concern and compassion for other organisms, however minuscule they seem to be. Once there were even maggots that grew on the wounds on his body. They caused itching of the wound, and inflicted pain by eating up his flesh. He would take them out of his wound and keep them on the floor for a while. After a brief respite he would pick them up and put them back on the wound.

Suri Nagamma pleaded him to cure himself of the tumor the same way that he cured his jaundice by making his own herbal concoction, after having suffered for long and when no other treatment helped in recovery. Again by the efforts of Suri Nagamma, there arrived an herbal alternative to treat his tumor by a renowned traditional practitioner known to her. But by that time, first surgery was already over. Ramana Maharishi generously offered the medicine to a lady who had similar type of tumor, saying that it had no use for him anymore and urged her to make use of the medicine. Incidentally she was cured from the tumor later. This reminds me of one of the Jataka stories where the to-be-Buddha in his previous birth threw himself to a hungry tigress with utmost loving kindness and compassion, as the tigress found it difficult to feed its cubs due to extreme drought. 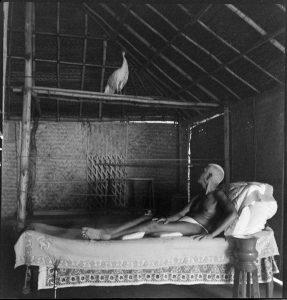 It was Friday, 14th April 1950, the day of his parinirvana. The doctors and attendants felt that it could be his last day. In the morning he tenderly gestured them to go and meditate. About noon, when liquid food was brought to him, he asked what the time was, adding a statement of premonition, “But henceforth time doesn’t matter.” With a sense of gratitude and appreciation, he kindly expressed his recognition of his close attendants for their long years of service to him,“The English have a word ‘thanks’ but we only say santhosham (I am pleased).” Out of perceiving what is impending to happen shortly, a group of devotees gathered in the veranda outside the hall and began to sing, ‘Arunachala Shiva’ from Aksharamanamalai.

Listening to the song, Ramana Maharishi slowly opened his eyes and shared a passing smile. Though too transient, it implied the fleeting life on earth and also the beauty and purpose of it. His smile was filled with utmost kindness and love and blissful droplets of tears slowly rolled down from the corner of his eyes. Followed by another deep breath, the transaction of air that had sustained his body for about seventy years stopped, retiring to its source, bidding farewell so smoothly, casting a blanket of calm and peace, without the impression of death on his countenance. For a short while the singing continued. Long and deep silence filled the air shortly, followed by a pall of gloom blanketing everyone present around. Everyone was completely at a loss for a moment and then burst into tears and at that moment a shooting star flared up in the sky and vanished. 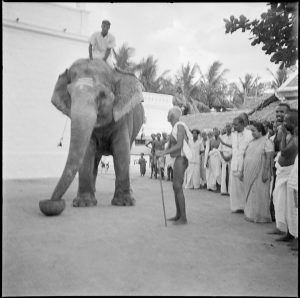 For many he had been the very meaning of their life, after having acquainted with him. There were people who truly believed that only through him there was salvation for them. For all of them the sole solace is his statement during his last days, served them as a source of inspiration and proved pivotal to their fount of faith, and at the same time provided subtle insights in to their existence. An ardent seeker should be able to console himself or herself by recalling some of his answers, particularly with regard to one’s body, life and its end. Peace, he offered through encouraging us to reach out to our original source. “For whom is the body or the birth? It is not for the Self, the Spirit. It is for the non-self which imagines itself separate. So long as there is the sense of separation there will be afflicting thoughts. If the original source is regained and the sense of separation is put an end to, there is peace”.

At the same time, he never tried to hide his human aspect while he continued to perform his life at the utmost spiritual realm. Once a man approached him and pleaded to Ramana Maharishi that his eye sight was becoming bad, not able to see properly. He prayed to Ramana Maharishi to give him relief through his grace. Ramana Maharishi nodded as usual and after the man had left, he told others ‘He complains of his eye sight, I have pain in my legs. Whom shall I ask for relief?” And while describing his personal death experience he underwent and he said that it is ‘The one infallible means, the only direct one, to realize the unconditioned, absolute Being that you really are’. 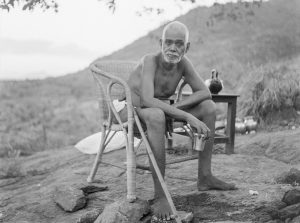 Above all, till his last, he persistently consoled those who were worried about his failing health.“Similarly, that which is born must die. Whose is the birth? Were you born? If you say you were, of whose birth are you speaking? It is the body which was born and it is that which will die. How do birth and death affect the eternal Self? Think and say to whom the questions arise. Then you will know”.

Some of the seekers implored to Ramana Maharishi to continue his worldly abode at least for the sake of them. They appealed to him, “What is to become of us without Bhagavan? We are too weak to look after ourselves; we depend on his Grace for everything.” And Ramana Maharishi replied, “You attach too much importance to the body,” directly indicating that his mortal end would not impede the continued grace and guidance that he ushered on them, by saying, “They say that I am dying but I am not going away. Where could I go? I am here”. There was suffering but no sufferer. He was dead but he continues his presence for his seekers. He kept reiterating, “They take this body for Bhagavan and attribute suffering to him. What a pity! They are despondent that Bhagavan is going to leave them and go away – where can he go, and how?” 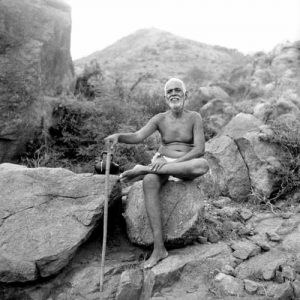 “I am not going away. Where could I go? I am here.” The seekers continue to reside at and visit Ramanasramam experiencing the invisible and intimate presence of Ramana Maharishi within and without. The word ‘here’ does not imply any limitation obliged to time and space. It’s rather the present, the simple present, as Self all the time.

When the breathe become air

Oh RamanaSai I love you

When the Dharma of the cops meets...