Forget the Iron Throne, Can Spiderman wield the Ironman mantle?

You just discovered yourself as a different person. You, the same person who once wore a thick-rimmed spectacles doesn’t need the same anymore to see what lies ahead. Yes, the one who could be easily bullied can fight back now. And now, you don’t have to stop at self-defense. You can now even save the world from threats, which you had seen only in the movies. How do you feel about that? 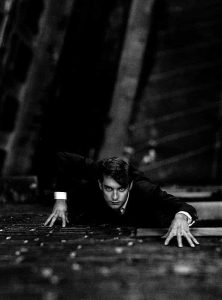 Yes, you have been blessed/cursed with superpowers. What would be your first move? Of course, you will be on a discovering spree. You must be tabulating what you can do and what you can’t do. Can I fly? Can I swing? Can I land a super punch? All these constitute a good origin story. When Sam Raimi’s Peter Parker got his superpowers, he did the same. He climbed a wall; the wall, which is nothing but his anxiety. No one can relate themselves with a nerd who got superpowers through a radioactive spider bite. But Tobey Maguire made sure we all did. How he dealt with his superpowers, how he dealt with anxiety post that, gave us new hope. That is why it is still dope. Pause. 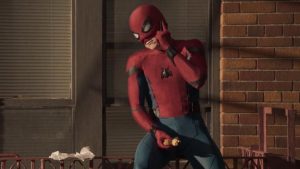 ‘You, good sir! Do we have to repeat the same?’ asks the Marvel Cinematic Universe. Even though it is still a Sony movie, the events related to Tom Holland’s Spiderman are very much happening inside the MCU. This is where Marvel improvises. People know Spiderman. They know how he got his superpowers. Let’s not get into that in detail. How about a Peter Parker who is nearing his mid-teenage? How about a Spiderman who can be a part of the Civil War, hired by the great RDJ, scratch that, Tony Stark aka Ironman? Now that a great cameo has been done, a standalone movie pops up. They know, this can’t be an origin story, however, they made it, to look like one.

Tony Stark/Ironman obliges for an extended cameo and teaches our friendly neighborhood guy to fight his own battles. More like Ironman 3.5, Homecoming was fun while it lasted. Tom Holland gets his nod from the public (who were once skeptic) as the new Spiderman, in both the Homecoming and the Endgame. But can he be the new Peter Parker? Everyone can be Spiderman. He is just a hero in a mask. But playing Peter Parker is altogether a different ball game. The double life, anxiety, love breakups, nerd attire, lost parents… it demands more. Tobey Maguire was more convincing as Peter Parker than Spiderman because Sam Raimi knew he is not selling Spiderman, but Peter Parker. Yes, people will like Spidey; kids, no matter what. But the success of the movie depends on people accepting Peter Parker as their friendly neighborhood guy. 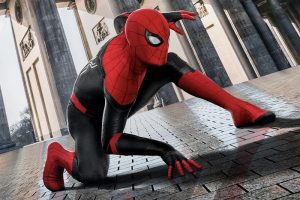 To achieve that feat now, the Tom Holland version of Spiderman needs a movie, which is more humane. A movie that puts Peter Parker, the boy from Queens, his emotions, his flawed decisions, his anxiety, his loss of Godfather in the front seat, while his superhero suit takes the back seat. They also have the most powerful weapon to sell a story. HUMOR. Endgame, which has some serious business totally depended on the ensemble and their past, present stories. There is no room for Ragnarok style humor there (forget, Starlord. Only he can be that stupid on such occasions). In Far From Home, Marvel is back to humor business.

People who weren’t there for the past 5 years (from Thanos snap in Infinity War to Tony’s blip in Endgame) are resurrected now. The society has to take them back now. Their families need to accommodate them back into their lives. There will be repercussions, chaos, politically incorrect stands… but there is no time for that in this feel-good world trip movie. Far From Home, cleverly evades those politics for another movie and moves the story away from that as soon as possible in the beginning. Yeah, people came to see Spiderman, not X-Men or Civil War. Save the politics for another day. 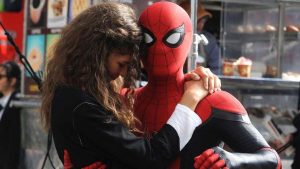 However, there is a major concern for the MCU, post the events in the Endgame and it starts to address that in this very next movie itself. How brilliantly can they end the third phase apart from raising questions about who can fill the shoes of the great RDJ, scratch that, Tony Stark aka Ironman? A kid from our backyard can’t be the one, right? Tony Stark was a majestic figure. He doesn’t have to lead a double life like other superheroes. Ironman was just Tony altogether covered with a metallic suit. He was himself in each and every superhero situations. He was in his own league, while it lasted. How come Peter Parker who still has anxiety issues in opening up to a girl can be the one who can wield the Iron mantle? How come a kid who begged Tony Stark to give his suit back in Homecoming be the next Ironman, anyway? Far From Home answers. And surprisingly, it is very much convincing.

The school which somehow finds a way to accommodate the blippers plans for Europe trip. Peter Parker who is still convincing himself that his world needs to move on without Tony, finds solace in his feelings for his classmate Michelle Jones (MJ). The Eiffel Tower, one of the tour destinations rings up a bell for Peter and he decides this is the right time for him to open up about his feelings. He also ditches his Avengers suit and almost ditches the Spidey suit, because he wants to be away from the superhero business for some time. Who can blame him? It’s summer and a teen like Peter Parker who had seen the Endgame really needs one. In the midst of all these, a super-villain should popup. To fool us, another Superhero pops up. With his mystical powers, he warns Fury and his team and Spiderman of new threats from the multiverse, from his earth. Called as Elementals, they are on a spree to destroy all the earths. 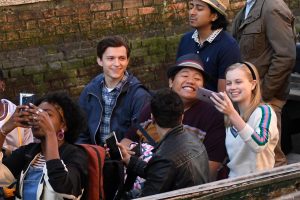 Nick Fury gives Stark’s glasses to Peter as directed by Tony himself. The glasses possess an artificial intelligence named E.D.I.T.H. which poetically expands as ‘Even Dead, I’m the Hero’ as a tribute to Tony Stark, which can be well-suited to Stan the Man, Stan Lee himself. We also have a new name for the ‘Spidey-Sense’ – ‘Peter Tingle’ (Read in Aunt May’s accent please). We had seen in the Infinity War, that Tom Holland’s Peter Parker indeed has this superpower, and now would be the perfect time to name it. PETER TINGLE!

Peter Parker refuses to align with S.H.I.E.L.D. as he thinks he is not ready. But in reality, he is still a teenager who craves for this new feeling called love. Post the battle in Venice, and after getting E.D.I.T.H. in hand, Peter realizes there is a legacy that needs to be fulfilled. Someone should wield the Iron mantle, someone should fill in the shoes of Tony Stark. He convinces himself Tony would never choose him, without understanding that Tony would do exactly the same thing that shouldn’t be done in the first place. After seeing the heroic display of Mysterio aka Quentin Beck, played by the brilliant Jake Gyllenhaal, Peter is very much convinced he can be the successor of Tony Stark and gifts him the E.D.I.T.H. glasses. For Peter, it’s the most cumbersome decision ever made, but it’s from his heart. 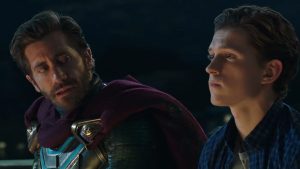 Now, as expected the tables change. The evil side of Quentin Beck has been revealed. He is a former holographic-illusions specialist at the Stark Industries who gets fired for his ideology. With a group of ex-employees, he formed a team of illusionists and they were the ones who created the Elementals as believable illusions. Mysterio evolves as a hero and also gains the trust of Peter and Fury by fighting those fake battles. His intention was to acquire those glasses from Peter and he has done that with ease. Peter soon discovers this with the help of MG, who in turn deduced that Peter is indeed the Spiderman. Peter comes back to Fury to reveal the evil intentions of Quentin only to find himself in a trap of illusions. After knowing, Peter and his few friends know about his evil plan, Quentin plans to create his biggest illusion yet, which once defeated, will project him as a savior to the world. He also plans to kill Peter and his friends while handling this situation. While, what he calls as the ‘Avengers level threat’ gets executed, can Peter, the Spiderman defeat him?

There is also a sub-plot involving the love life of Aunt May with Happy Hogan. The latter gains the uncle like stature to Peter towards the end by giving a pep talk when it is needed. Perhaps, that’s the nucleus of this whole ‘Far From Home’ story arc. Tony Stark trusted Peter Parker and enrolled him as an Avenger. Now that he is gone, can Peter take his place? Tony’s decision can be both right and wrong. But it is up to Peter to decide that. His choices, his actions, and its outcomes will decide whether Tony was right or not! Looks like a bigger shoe to fit in, right? Spiderman is a sticky guy and he will hold that Ironman shoe easily. I mean he is powerful. 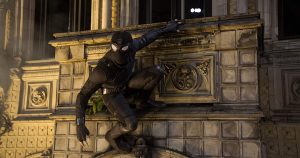 However, the bigger question is can Peter Parker take the mantle of Tony Stark? Now that Peter Parker has been sold to the people as a worthy superhero with or without his suit, the majority would say he can pull this off. How convincingly that can be done in the future is all that matters now! I am sure Marvel will find a way for that. The underlying hint for that is in the mid-credits scene, where Quentin aka Mysterio reveals the Spiderman’s secret identity, Peter Parker, a friendly neighborhood teen from the Queens. This scene can be equated to the iconic “I am Ironman!” sequence in the movie ‘Ironman’. And what better way is there for Peter other than this to start what looks like the biggest battle of his life. Spiderman can do this. But as Peter Parker, can he do the same?

P.S.1: Even though Quentin’s multiverse theory turned out to be a bluff, I bet that would be made true in the next MCU movie. Because that sounds like the only logical way to include X-Men story arcs in the MCU. Let’s bring them home, where they actually belong to!

P.S.2: The post-credits scene with the Skrulls masquerading as Fury and Hill, the whole time is a JOKE. It has been placed there only to fill the loopholes and to explain the shitty decisions taken by Nick Fury all throughout the movie. S.H.I.E.L.D. can be dumb. Nick can’t be.