The whole world is talking about Covid-19, the global pandemic caused by an unassuming, invisible, but seemingly invincible enemy of the humankind. Even in the rural areas and suburbs, there are barricades, banning the public to move around, or even pass by a house, or a vegetable shop, having been identified as a place of victim to Corona infection.

People panic especially when the victim happens to be our neighbor. “It has come to our neighboring village”, or “It is there in the next street’, people keep saying, as if the most awaited film star has reached the next door. Thiruvalluvar complains about the cacophonic and clamorous voice of human mind and its unending tribulations, “Never will they contemplate about life, though thinking of millions of other things (Section 34, Impermanence; 337)”. 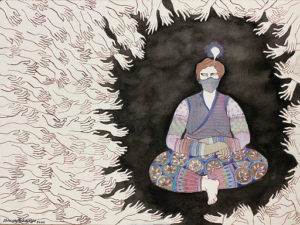 But we tend to forget that even if the Corona does not reach our next door or neighboring street or village, death is inevitable. How to undo this birth? Isn’t it through our death? Be it a Corona, or a dengue, or an accident, cardiac arrest, whatever, they are simply an excuse for an embodied life to conclude one of the phases of its journey.

As we all know, one of the primary teachings of Buddha is founded on impermanence, anichcha in Pali. Thiruvalluvar allots a section for importance and says, the world is famously known to have a person not alive today, who lived yesterday (Section 34, Impermanence; 336).

But as we try to comprehend the nature of the Universe, it occurs to the human mind experientially that life is not impermanent but rather a process, a continuum. Just because the human mind could understand things by splitting the wholeness into bits and pieces, like a loaf of bread, evenly sliced to facilitate easy handling and eating, the whole cosmos is a loaf of bread that the limited human mind could not decipher its magnanimity nor the no-boundary state of the Universe. It can only see, feel, live through its own embodied physicality and mentality. Whatever is felt is an experience of the moment based on its perceptive abilities and conditionality. 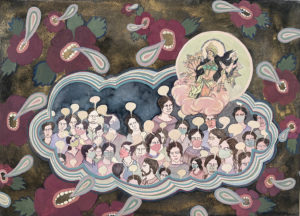 The whole Universe is in the state of action, endlessly without beginning or end. Stephen Hawking says that that Universe has a contracting as well as expanding nature, due to its boundlessness. A fraction of its boundless nature could be experienced through meditative absorption and its states. But it is an innate quality of every being embodied here. Dharma, the first brother of the Pandavas exclaims to the Lord of Death that the most surprising aspect of human mind on earth is that it doesn’t feel about its own mortality even when it witnesses the mortal end of other beings. Contrary to it, Ramana Maharishi authenticates that deathlessness if the nature of every being and that is the reason one innately feels that life is of the nature of deathlessness.

The pandemic of Covid-19 induces only the angst that is already annoying every human mind, an existential angst, in the form of poverty, death, sickness and other current-world sufferings such as loneliness, boredom, anxiety, and feeling of nothingness in spite of having everything that one wishes to have in life. The existential challenges are insurmountable for the modern day survivors. And the feeling tone of this angst has been exacerbated by the Covid pandemic.

It is not only the craving of having more, but craving for the immediate ending of anything, be it our routine suffering, or the pandemic that the human kind has been scrambling to deal with, searching for vaccines, drugs, immunomodulatory, immune-stimulant agents and so on. On accepting there is freedom. Spiritual literature, at the same time, emphasize that realization is through liberation from delusion, especially in the form of craving, thirst, is considered nibbana, the realization of the ultimate taste of deathlessness. Thirukkural says, where craving or desire, avaa, ends there remains deathlessness. Uprooting insatiable craving offers unchanging deathless nature (Section 37, uprooting of craving; 369). Most of the traditional Indian system of meditations aim towards liberation or experiencing the state of deathlessness. 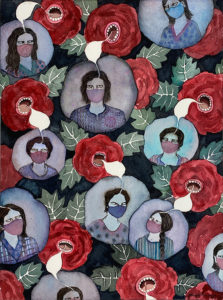 Therefore the answer lies, it seems, in opening our mind eyes to the reality as such instead of simply imagining on the numbers, number of incidences, mortalities, morbidities, predictions, and assumptions and also the eventual socio-economic and financial implications of the pandemic. The often-heard terms like quarantine, isolation, containment, restrictions, bans, lock-downs are going to not one time offers. They are going to haunt the humankind in future as well. If not Covid, it can be any other X or Y virus, hereafter.

Note: Artwork is by Dhruvi Acharya, Painting in the time of Corona.

The Pyrrhic War on Corona

Montaigne : Self – Consciousness (Part I)