The term “Devadasi” can be translated as “female servant of God”. Devadasi is one of the most contested terms in Indology, Sociology and Gender Studies. The system was (and is ) condemned as a machination in the guise of religious ritual to exploit women and turn them into mere bodies designed for the pleasure of men. Reformists and progressives used to jubilantly brandish the law against Devadasi system as of the milestones in the path towards rationalism and one of the major victories in the battle against patriarchy. However, there has been a paradigm shift since the emergence of feminist scholarship in cultural studies. Now there are arguments that the abolition of the devadasi system itself was an ignorant, knee jerk reaction of a patriarchal society that wanted to boost its progressive credentials. There are a number of feminist scholars who now argue that the Devadasi system had provided the women of yester-centuries with the freedom to pursue arts and property rights when compared to other women of that age who were shackled to domestic duties. This argument questions and interrogates the patriarchal vanity and audacity of trying to decide what is good for a woman. The scholarly writings questioning the “reform” also condemn the patriarchal notions of chivalry that aims at saving hapless women and thereby attesting the androcentric view that women lack any agency. The assumption, that a woman is doomed or saved by men ignoring the role of woman and the validity of her choice, is severely criticized in contemporary feminist discourse.

Ironically, women who took an active part in such “reformist” movement are now being considered as mere pawns who chose the dominant ideology over their individual agency. The aim of this paper is not to get into a debate of merits or demerits of the system in question, but it focuses on how the identity of “Devadasi” was a product of missionary and colonial interests. The researcher intends to illustrations from four arcane texts to present an alternative history of Devadasis. To begin with let us turn our attention to Siva Purana, one of the eighteen Puranas in the puranic canon of Hinduism. Indological scholars place this text in the Tenth Century. There is an episode in this text related to Devadasi. To be precise, there are scholars who believe that the description of the character suits more for a commercial sex worker than for a devadasi. The tale is present in the Deva-Leela Section, Shata-Rudra Samhitaa (Chapter 26). Mahananda who lived in Nandhigrama indulges in harlotry. However, she is a devotee of Shiva. Shiva appears as a wealthy merchant in front of her. He solicits him and after a few dramatic twists and turns, Shiva acknowledges her devotion and grants her salvation. One has to keep in mind that the text provides an inclusive option and that does not consider sex-workers as completely abominable beings. The text neither condones the choice nor justifies it. Harlotry is presented as a sinful, socially unacceptable act. However, the text suggests that even women who have chosen that can receive divine grace. This episode from Shiva Purana gives us a glimpse into the attitude pre-colonial Indian society about prostitutes. If they were not hostile towards prostitutes, then there is little chance that they would have seen Devadasis with aversion.

The second textual bit that I like the place before you is also connected to the Saiva lore. There is a sect of Saivas named Siddhantha Saivas, who are mostly found in Tamil Nadu and certain regions of Sri Lanka. Followers of Saiva Siddhantha are from a number of castes. I am going to provide you with images of a couple of pages from a text named Saiva Asoucha Paddhathi. This text deals with the customs and rituals connected with birth and death impurities. The text lists rules for Saivas belonging to various varnas. It is interesting to note that there is a separate section set aside for Rudrakanikas and Devadasis. The mythological origin and the classification of this class of women are listed in this text. The printed version is at-least hundred years old. Look at the image provided below Here it has been categorically stated that Rudra Kanikas are offspring of Shiva himself. In the next section, the text speaks in the voice of Shiva and states that Rudra Kanikas, Devadasis and a few others were created to serve Shiva himself. 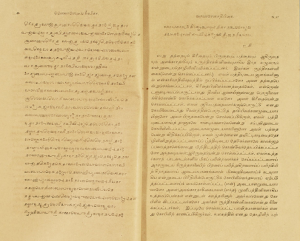 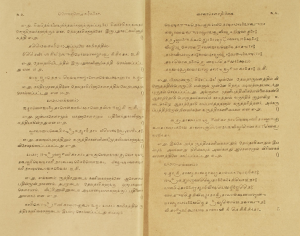 At this point, it is to be noted that Saiva Siddhantha is the predominant sect of Hinduism in the Tamil speaking parts .When religious texts that are akin to smruthies acknowledge the divine origin of Devadasis ,then it can be infered without much pain that Devadasis were not considered as outcasts. I would like to provide you with yet another example.This time the text is a hagiography of Sheshadri Swami ,an avadhudha.The text says that Sheshadri Swami blessed a Dasi by throwing a dry flower at her.As the result of this blessing ,the woman was able to secure a liaison with a wealthy business man.

What is more interesting than the action of the god man is the choice of the hagiographer. This book was published in 1930s and both the author and the publisher were orthodox Brahmins. They had no inhibitions in mentioning such a miracle in the text. There are evidences even in the missionary writings about the enviable religious and literary scholarship of Devadasi. I would like to produce to images from a book written by Amy Carmichael in 1905. Carmichael was a very active missionary in and around Tirunelveli in the last century.

While the first two pages describes the rituals connected to becoming a Devadasi, in page number 219 ,we can see that Carmichael unconsciously documents the scholarship of the girl and the old woman. This proves that most of the devadasis had a very strong footing in religious texts.

I do not argue that there were no degradation and debaucheries. Devadasis had their share of trouble too. However, they were not in degraded condition. The system needed reformation but it was demonized. There were two reason for such a demonization. The colonial administrators were blinded with Victorian morality that had no shades. On the other hand, missionaries had their own agenda. The Devadasis were the rivals of missionaries as the devadasi women had a formidable knowledge of Hindu religious texts. Conversion was almost impossible as long as their voices were loud in the public sphere. Hence the system was demonized and the Devadasis were “reformed”. (Brahmins, the other custodians of Hindu learning were also demonized). It is essential to understand these aspects before trying to put forward ideas like, ”the Brahmins appropriated Bharatanatyam and Carnatic music from Devadasis and gave respectability to these art forms”

Gods/Goddesses, Demons/Demonesses and the Tamil Maiden

The Pyrrhic War on Corona

US Presidential Election 2020: Trump is Defeated....