In the opening scene of Sonchiriya, a group of dacoits witness a dead snake on their way. A scared bandit requests that they should turn away as this is a sign of a curse. The one they can’t break. Yes, they do believe in such superstitions. However, they proceed that way, because their leader ordered so. Later, when questioned on his decision, the leader simply points out changing the ways now won’t take away the curse. They are cursed already and it will never be broken. In this simple dialogue, there exists everything the movie wanted to convey. They know they are full of sins. They know their path is not righteous and they feel guilty about it. They even have ghosts from their sinful past attempting to haunt them on a regular basis. But they can’t do anything now. It’s too late. 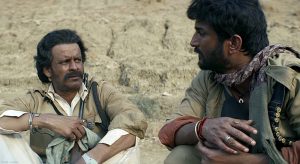 Sonchiriya teases that even the moral and philosophical quadrants can be a part of what we call as the Dharma of the dacoits (Yes, something like that exists). When the dacoits are on a mission to rob a wedding celebration, they announce in speakers with all the love in the world that women and children should hide, as they have no intentions to hurt them. This announcement coincides with the declaration of India’s emergency, but the dacoits simply don’t care. They proceed with whatever they planned and it turns out to be a major turning point of their lives.

The kingpin of the dacoits gets killed after the robbery goes wrong. While on their run, a woman and a girl who was sexually abused crosses their path. In an attempt to save her, there occurs a rift in the gang. Now everyone is on the run from one another. The cops are chasing the bandits; The caretakers of the woman and the girl are chasing the bandits; Even the bandits are chasing the bandits. However, the tricky part is, instead of labeling persons as good and evil here, the movie just caters the motives, ideologies or to simply put, dharmas of everyone, particularly the dacoits and challenges us to take a call whether they are good or evil. In the land of raw and rustic Chambal valley, here is a tale that can stir a mountain of emotions, credits to the script that refuses to pick a side and tries to stay neutral till the end.

We see Manoj Bajpayee in a cameo role as Mann Singh, the leader of the dacoits belonging to the Thakur tribe. They have certain Dharma and they stand by it. Well, at least, Mann Singh and Lakhna Singh, the charming and solid performer Sushant Singh Rajput. Mann Singh is an experienced leader who seeks salvation for his crimes, yet continues to rob people for living. Knowingly or unknowingly, he protects Lakhna from doing the robbery as he remains as a watchout for them. During the robbery, when the special task force led by a Gujjar inspector opens fire, Mann Singh utters, “Don’t worry, the Sarkar bullets won’t kill us. But their promises will!”. Perhaps, the most powerful dialogue of the movie that subtly conveys why the dacoits are dacoits and why they are stubborn on naming themselves as Baaghis aka the rebels, but not the dacoits or the bandits. 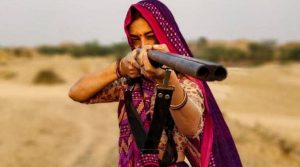 Lakhna and his character arc gets the limelight when he decides to help the little girl who belongs to a lower caste. He even questions the then leader Mann Singh about their Dharma and also the now leader Vakkil Singh. Without a clue, he writes his own Dharma when he decides to help the girl, which even puts his life is in jeopardy. His tricks as a watch-out is something to look for. The beedi smoke, the magic trick with a sweet and sour candy, placing a knife carefully in the girl’s room in order to protect her… everything is subtle. He emotes usually with a teary and sleepless eye that hints there is indeed a sinful past, the one which he or Mann Singh can’t simply shut or bury away. It involves an accident, the one in which they both kill a group of little kids. It is clearly against their Dharma and they can’t simply call it an accident and walk away. To redeem that, Mann Singh agrees to do the wedding robbery even after knowing the secret plan of the Special Task force. Mann Singh believes everyone should pay for their sins and he happily faces death during that incident.

Vakkil Singh, the interim leader of the gang played Ranvir Shorey follows the Dharma of the rebels, that is continuing to rob and loot as per their wish. He even agreeds to handover the woman and the girl to their abusive family for money. But when he learns the truth about Mann Singh, he flips the switch and agrees to save the girl. The dacoits, including Mann Singh, believe that they can wash away their sins if they find Sonchiriya (a golden bird). Metaphorically, Lakhna and Vakkil now both believe the little girl who was a sexual victim of their own caste of Thakur men, is the Sonchiriya they are looking for and they should save her life no matter what. 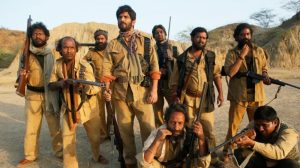 There is also a subplot involving the woman, Indumathi Tomar, played by Bhumi Padnekar, someone who killed her own father-in-law as he is the one who raped that little girl. She even goes against her own family to save her as she believes it is her duty, her Dharma. Her angry son and the timid husband is also on the run to find Indumathi. Even though the son wants to kill his own mother, the husband believes she can be taken back into his family. The final confrontation of this subplot during the pre-climax is the high point where the movie strikes hard. It openly showcases the status of women in a family and the respect they get for being righteous. When Indumathi is on the run, she is scared for most of the scenes. But when she witnesses her own son turning against her, she immediately becomes a mother and questions her son with the naked truth. The scene looks powerful and before that angry Indumathi even the guns and the son who is holding it, fail to fire. 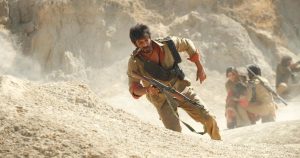 Of course, there are pitfalls, for example, the movie moves at a snail pace for a story filled with guns, revenge and deaths. There is a real life connection as we see Phuilya dacoit and Phoolan Devi, but we only wish there should have been a reference for that from the beginning itself. It looks like a forced attempt to balance the crimes the script done against its women. “Brahmin, Vaishyas, Sudras, Thakurs, Gujjars, etc., These castes are for men. But we, women, we belong to a different caste altogether!” says the leader of Phuliya dacoit to Indumathi and it still echoes now and then even after we leave the theater. It keeps haunting us just like the ghost visuals of a little girl. Also the Gujjar inspector, even though he has a strong motive to hunt down the Thakur dacoits, his character and his acts in the rest of the scenes clearly portrays him as an evil person, the one who deserves death. Also there are no solid reasons for Lakhna to kiss the death-bed voluntarily as his mission becomes complete and he can go back to the life he always dreamt of. The one where he rides camels as a trader with some nice outfits. Maybe in an alternate universe, Lakhna! 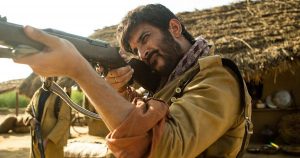 Having said that, Sonchiriya stays true to its name  and shines brightly, even soars high above all the one-sided dacoits-are-evil flicks. If the Tamil movie, Theeran Adhigaram Ondru is an out-and-out police version of a criminal case, Sonchiriya is the account of the bandits, or the what they call themselves, the rebels.

The Urgency Of Change: On Suicide