How Kim Ki-duk tamed creationism to look like an odd joke without having any such intentions!

That’s a warship, sailing through a calm and serene sea breeze, brimming with all classes of people only denoting the miniaturized version of our planet, the earth. There is a right-hearted couple, a young, yet to mature bunch of people, a future prime politician with his caged son, a need-a-comb hairstyle gangster with his followers thus openly declaring himself as the bad guy we see in most of the commercial fanfares. There is also an old man, a typecast we can say who knows what the future has to offer. If you didn’t grasp yet, yes, Kim Ki-duk’s new movie Human, Space, Time and Human takes place entirely on a warship. 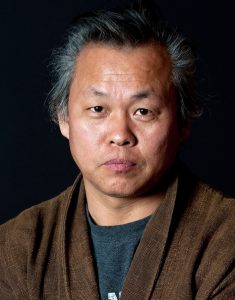 In the beginning, the movie questions the authoritarian way of treatment, the corruption being done by a politician,  the gangsters and the officers of the ship. The common folks create an outrage, one that looks tiny and negligible (but not at that time) as there are many such commotions to follow. We have Eve and Adam and surprisingly Eve is not with Adam, at least not yet. Soon, when the night comes, people booze and share prostitutes like a property, only to get ready for a nightmare that is yet to unfold. The old man continues to collect dust fragments from all over the ship with a smile even after almost getting thrashed by the gangsters.

When we sit tight to witness the nightlife inside the warship, horrific incidents were thrown at us without any mercy. We see Eve getting molested repeatedly by the Politician and the gangster kingpin whom he won over his side. Even Adam, the son of the Politician whom we thought as a righteous young man didn’t deny the opportunity of sexually assaulting Eve. With all the atrocities coming to an end on the daybreak, a set of unexpected events start to unfold leaving us perplexed. Hope the second word ‘space’ in the movie’s name rings a bell. Yes, the warship leaves the water and takes air as its medium of travel. How this drastic change affects the people in it has been told in the next 90 minutes and needless to say it has Kim Ki-duk’s stamp all over it. 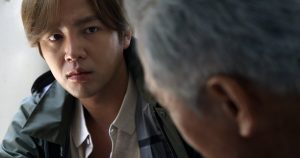 Halfway through ‘Human, Space, Time and Human’ one can relate it to Darren Aronofsky’s cruel and hardcore ‘Mother!’. Not just because both are metaphorical films but because both had all the set pieces to become a masterpiece, yet remained under-cooked. Al-throughout the movie, Kim Ki-duk hints biblical references and prophecies related to judgement day or the end of the days. The film follows the chapter-like narrative structure, the one we witnessed in Kim Ki-duk’s 2003 outing Spring, Summer, Fall, Winter… and Spring.

There is gore, gratuitous violence; there are clichéd characters; undigestable misogyny that raises a question whether the ultimate aim of all the men on the warship is only to have sex with women. Even the enlightenment delivered to the victimized woman, Eve by the old man looks forced. The old man is convincingly portrayed as a mystical God-like creature, while the other men were just treated as sexually craving demons. This questions the very nature of realism that only goes haywire in the following events. People were shot dead, disposed, assaulted, left out in hunger, treated as rebels, shown as two faces without a mask and last but not least as cruel opportunists. 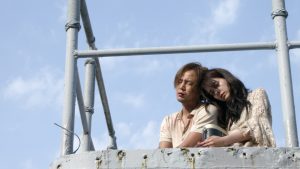 Even though there is scope here to show the landscapes extensively, Kim continues to focus on the tiny speck of dust he created, the decommissioned warship that is now a cruise ship. What started as a promising adventure then turns into a gore galore with explicit references to several  mythologies. Soon we see the politician gaining more power in the most inappropriate manner as more and more strange and difficult situations emerge one by one. We all know Kim Ki-duk’s love for magical realism, humanism and other philosophical touches. All these things were knitted tightly in this story only to amuse us and not to preach anything. However here he takes a leap of faith and tried to deliver a  trong comment on social issues and other contemporary political struggles.

The gore-fest is extensive and one may say it is uncalled for. We see the dead bodies of the defeated being crushed as bags of dust only to grow food for the pregnant Eve. The old man teaches her how to survive and when she was left with just Adam (yes, the politician’s son who also assaulted her), he disappears in his own mysterious way after giving away his heart for good. Adam even displays a love for cannibalism and soon their story denotes the history of humans as told by the folklore. At one point, when Eve was left alone with her adolescent male child there is also an incest reference followed by a pan out shot in which we see the earth getting transformed with the plants and trees grown by the old man and the Eve thus creating a new landmass. 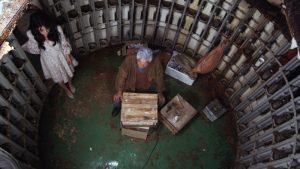 The mythology embedded in the DNA of the movie didn’t reveal the intentions of the director. It was left to us to decode, deconstruct and take it in a way we like. As mentioned earlier, we can even draw parallels to Darren Aronofsky’s ‘Mother!’ where we see Jennifer Lawrence, the mother nature figure being destroyed and created in a cyclic loop by us, the humans. Kim Ki-duk goes one step overboard and hints that boozing and sleeping with prostitutes is an inhumane act and one needs to be judged and punished for the same. Or at least that’s how we can decode this blood saga.

Yes, the  movie is high on sexism, fundamentalism and religious references but those left aside, it is still very much a Kim Ki-duk’s film that missed its chance of becoming a masterpiece as he fails to make this ship reach the shore like he always does.

Casteism and Bigotry: A Canker in the...

The Bliss We are Blessed With: Selections...